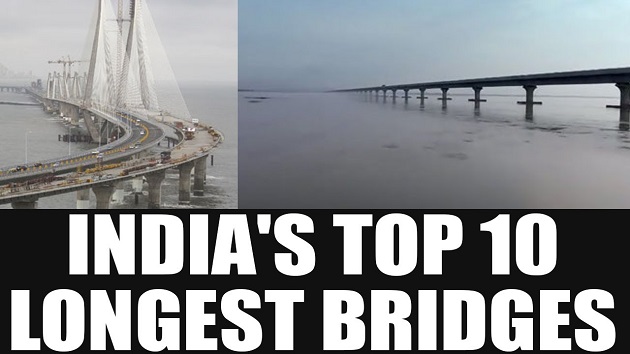 Though thousands of bridges are famous in India, some such bridges are famous as India’s biggest and longest bridges. Whenever a bridge is built, in India or anywhere else, it brings more business avenues, reduces travel time, and increases job opportunities.

This bridge is in the state of Assam, India, whose length is about 9.15 km. It works to connect Assam and Arunachal Pradesh with each other.

The second number in this list is the Dibang River Bridge, which is 6.2 km. This bridge present in Arunachal Pradesh is also very important for India from the military point of view.

The length of Mahatma Gandhi Setu is about 5.75 km. This bridge works to connect Patna, the capital of Bihar, with Hajipur.

The fourth number in this list is the Bandra-Worli Sea Link present in Mumbai. This bridge of about 5.6 km connects Bandra with the western cities of Mumbai.

Bogibeel Setu i.e. bridge built over the Brahmaputra river. This bridge of about 4.9 km connects Assam and Arunachal Pradesh.

Vikramshila Setu Bridge is the largest bridge in Bihar after Mahatma Gandhi Bridge. The length of this bridge is about 4.7 kilometers.

Digha-Sonpur Bridge is also in Bihar. This bridge is the second-longest rail as well as a road bridge in India. The length of this bridge is about 4.55 km.

This is a four-way road bridge connecting two major cities of Bihar. The cities of Arrah and Chapra are connected via this link. Arrah is a historically important place whereas Chapra has a frequently visited Ambika temple. According to estimates, this bridge reduced the distance of traveling from 120 km to 21 km. Now people have the option of the direct route rather than taking a detour towards Patna. Officially named as Veer Kunwar Singh bridge and cost more than 800 crores.

The Godavari Fourth Bridge is also known as Kovvur–Rajahmundry 4th Bridge is built across the Godavari River in Rajahmundry, Andhra Pradesh. This bridge was constructed, to reduce the road distance between Kolkata & Chennai by at least 150 kilometers. This dual bridge connects Kovvur in West Godavari district to Diwancheruvu Junction in Rajamahendravaram in East Godavari district via Katheru, Konthamuru, Palacherla areas in Rajamahendravaram City.

The tenth-largest bridge is also built above the mythologically important river of India, the Ganga. The construction of this took a whole circle when it was opened by PM Modi in 2016. I say that because it was Mr. A.B. Vajpayee who inaugurated the construction in 2002 when he was the prime minister.

If you liked this article(Top 10 Biggest and Longest Bridges in India), then do share it and stay connected with your website (https://sstsports.com/)to read other similar articles.