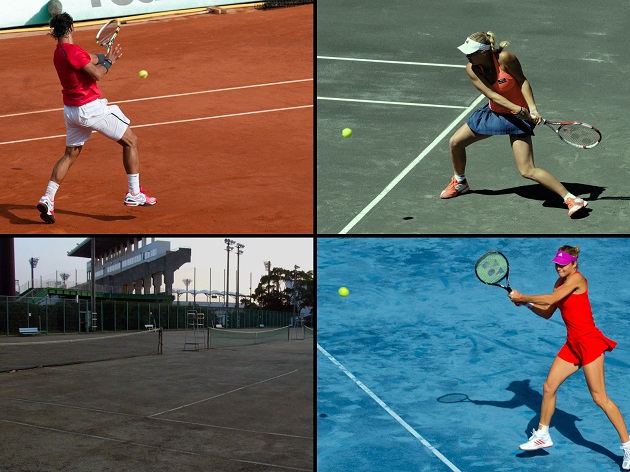 There are 4 different types of tennis court surfaces. you get to see our playtesters plan on all 4 of the surfaces that I’m about to talk about first things first in the United States were very comfortable on the hard courts. There are basically three major types of court surfaces: Hard Courts, Grass Courts, and Clay Courts. All three have their benefits and all three result in a very different bounce of the tennis ball.

2. Clay Courts: we have here now our friends in Europe they are very familiar with clay courts they have the beautiful red clay. this is actually going to be a great court on your body it’s going to give you less impact there’s a lot of sliding involved you’re going to get some funky bounces in the United States. we do have clay courts. as well not as popular here in California so back you say no you guys know what I’m talking about we also see a lot of green courts green clay courts in the United States especially in California. for these sometimes can be a little bit grittier whereas in Europe they’re nice and soft that clay feels amazing underfoot and it’s definitely a different type of tennis the court’s place slower and you are going to want to get a clay court specifics you to play and slide efficiently.

3. Grass Courts: out there now are friends in Australia who have been playing a bunch on the grass tennis courts these courts look beautiful and as you know from Wimbledon there it’s just an iconic grass court that’s going to play super-fast actually so this is the fastest of the courts I’m it’s going to give you some interesting bounces here and there but pretty consistent everything’s nice it stays a bit lower so it definitely rewards a faster game style big hitters big server serving volunteers are gonna enjoy that grass court and again this one’s going to be nice and soft on your body.

4. Carpet Courts: In the fourth court I wanted to mention our carpet. Courts we see those throughout the whole world actually our friends in Europe do you have a carpet court. that they do play on and they’ve done some plates has out there and again this one’s going to be similar to a grass court going to be fast the bounce is going to be a bit lower and again it’s also going to be a little softer on your body compared to a hard court now definitely we have more we can talk about with these courts as a far as different game styles that are benefited and different shoes.

Why Indian Fail to Clinch a Medal at Olympics Despite Being a Sports Loving Nation?