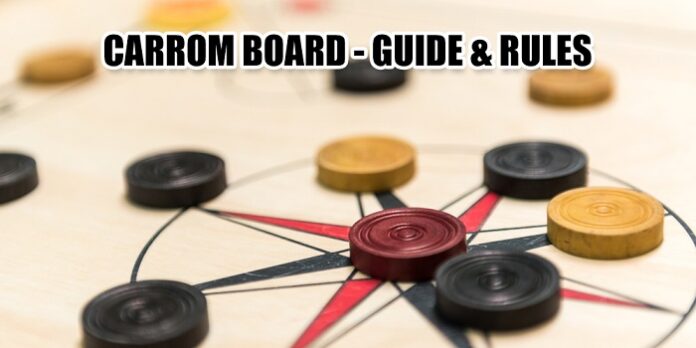 Today we are going to talk about a very much liked game from children to old people. People of all ages like to play this game. Whether male or female, this game is very popular among all. This is an indoor game that you do not have to go anywhere to play, nor do you need a large space. By keeping it in the middle of any small place or table in your house, you can comfortably sit on the chair and play with four people simultaneously.

Here we are talking about carrom board which is a very playable game. There are some rules for playing carrom board, you need to know these rules to play this game. Here you are giving information about the rules of playing Carrom Board, Carrom Board Basic, International Rules.

Carrom board is a square board made of plywood, with holes in each corner, in which the pieces playing in carrom are dropped. There is a wooden border about half an inch around the board, which prevents the piece played in carrom and the striker from going out. The square shape of the carrom is 76 cm.

Its diameter is about 4.5, the upper surface of the carrom is smooth, which helps the pieces to reach the hole made in the corner. In the middle of the board, there is a design vrat in which all the pieces and queens are decorated. A strip is drawn around the board, whose length is 47 cm and width is 3 cm. This strip is called the striker line. On which the person playing the game puts the striker and strikes in pieces.

Not much material is required to play carrom. It only has one striker. There are 9 – 9 pieces of two colors, and there is a red-colored piece which is called the queen. The top surface of the carom contains powder to be poured so that its top surface remains smooth.

How To Play Carrom Board

In the middle of the fast a red-colored goat i.e. queen is kept. After this the game begins, the player who chooses the color of the piece moves to get the piece of that color only. In this there is a striker from which the player hits the piece and gets it by putting it in the hole, for each piece scored, one point is obtained, there is a queen in it. To get which you have to first get the queen and then a goat.

If you do not succeed in getting another piece after the queen, that queen is placed again in the center of the circle. There are 29 points in an innings, three such innings are played, which team has to win in two innings. In the end, the player who has more points is declared the winner.

Rules of Foul: There are also many rules for fouls in carom

Here you have been provided information about Carrom Board. If you want to get other information related to this, then you can visit SST Sports. With this, you can ask your thoughts or suggestions, or questions through the comment box. We are waiting for your suggestions.